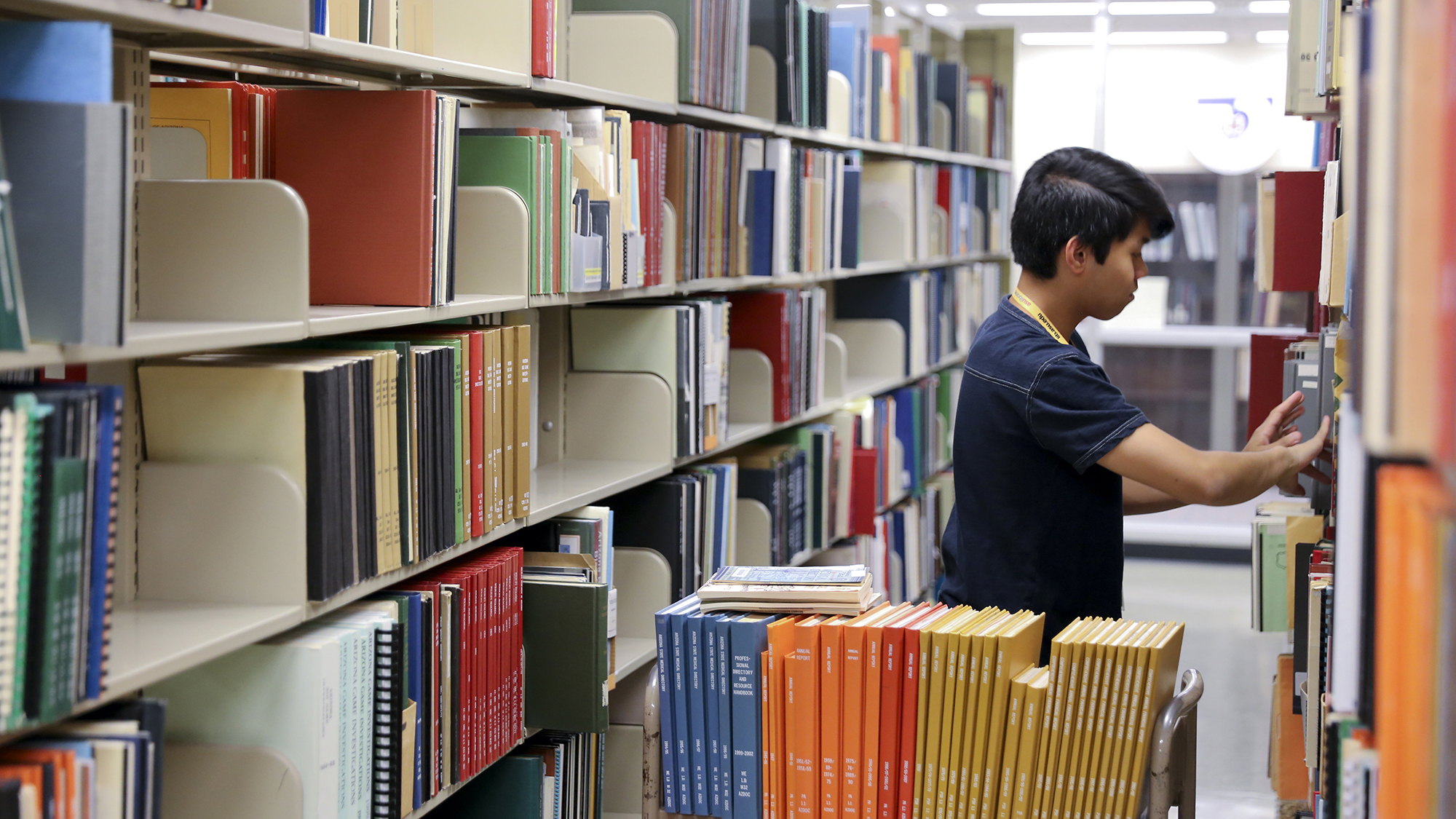 PHOENIX – Students at Rollins College in Florida are designing custom “I voted” stickers for absentee voters. Across the country, the University of Southern California has partnered with county officials to host voter registration events with prizes, games and free food. And at the University of Wisconsin-Madison, the student government plans campuswide voter registration drives as well.

Across the country, groups and organizations promoting civic engagement among college students have spent hundreds – if not thousands – of hours trying to galvanize this large, yet often elusive group of potential voters.

The Campus Vote Project, one of the most prominent college voter outreach groups, has launched an initiative to establish “voter-friendly” campuses. So far, more than 90 institutions, including Rollins College, have agreed to commit to things such as hosting voter registration drives, inviting candidates to speak or offering rides to the polls.

Why go to the trouble of recruiting college voters? College students have the potential to influence elections. There were 17.3 million undergraduate students enrolled in degree-granting postsecondary institutions in 2014, according to the National Center for Education Statistics. Experts predict that population will increase to 19.8 million by 2025.

Yet millennials have the lowest turnout rates of all the generations. Because the majority of college students are under age 25, they make up a significant part of that age group.

Experts have speculated on a number of reasons why college students don’t vote: They don’t feel connected to the community, don’t like the candidates or don’t know enough about the issues.

But for many, this isn’t because of voter apathy, but rather the hassle involved with registering to vote and casting their ballot while in college. They face hurdles including proof of residency, absentee ballot use and voter identification. These issues tend to disproportionately affect college students because so many students travel out of state for college.

“There's a whole group of states that are trying to make it harder and harder every year to get to the ballots,” said Mike Burns, the national director for nonpartisan Campus Vote Project, which focuses on informing and helping solve student voter issues. “It’s stuff that boils down to a lack of information as opposed to a lack of interest.”

Students must show proof of residency

Lilly said she was told by election officials that students could not register using a campus address because it is not a permanent residence. After meeting with civic leaders at the National Youth Feminist Leadership Conference in March, however, Lilly said she realized that wasn’t accurate.

“I was so furious,” Lilly said. “I have never been so infuriated in my entire life.”

Lilly said election officials also told her that if students tried to vote in Baltimore County instead of their home county, they could lose financial aid and scholarships or face fines for incorrectly filling out their voter registration form. “Where I register to vote and how I vote is not indicative of my financial aid. The Board of Elections is not able to separate that tie,” Lilly said. “How can you lie to students like that?”

She called it “systematic suppression.”

She said she wanted to vote in her college’s county instead of her home in Pasadena, Maryland, because she was more invested in issues in Baltimore than she was in the politics of where her parents live.

“The local politics affect our campus, and people pretend that it doesn’t because we’re in our own little bubble,” Lilly said. “Specifically, locally in Baltimore County, it’s important to me because we have no one representing students in our county.”

Lilly said she plans to register to vote this semester.

The Baltimore County Board of Elections did not return repeated requests for comment.

In Arizona and at least a half dozen other states with voter ID requirements, students cannot use their student ID to vote. (Roman Knertser/News21)

In Arizona and at least a half dozen other states with voter ID requirements, students cannot use their student ID to vote. (Roman Knertser/News21)

In 1979, the U.S. Supreme Court affirmed a ruling that holding college students to a different standard of residency than other people or requiring them to swear they will remain in the community after graduation violates the 26th Amendment in the case Symm v. United States.

“You don’t have to say, ‘I intend to return here forever,’” Burns said. “You don’t need to know that you’re going to be there after graduation. Because it’s based on people’s subjective intent, it’s squishy.”

Appalachian State University student Rachel Clay served as an election protection field coordinator for a campus program and organized poll watchers. She said she and her poll monitors witnessed students at her North Carolina school who had issues meeting voter residency requirements.

While Clay said this was – in part – because the election officials were unaware of the laws, it also was done because “the Board of Elections doesn’t really want students to vote.”

“Our polling officials, they are really not helpful,” Clay said. “They misinform. They lie to students. They scare students away from voting provisionally, and they take really, really long to do everything. So our lines are super duper long, and students just can’t stand in line for two hours.”

Watauga County Board of Elections Director Matthew Snyder said when they investigated the issue in March, they didn’t find any “substantiating evidence” to Clay’s claim.

“They did address the issue on the first day of early voting with the poll workers to make sure they followed procedures,” Snyder said. “They found no evidence that workers were impeding the process.”

To get more of her classmates involved in voting in person, Gray set up a table with her brother, David, the day before the Illinois primary election to inform students about the same-day registration. However, David Gray said the students were told they didn’t have the sufficient materials to prove their residency since they had P.O. Box addresses.

“They told us that people don’t live in their post office box, but why would we have a P.O. Box if we don’t live here?” David Gray said. “They were asking for a form of ID that no student has because we don’t rent the dorms, they are part of our tuition.”

The Federal Voter Registration form states that voter applicants must use their “home address,” and voters can’t use “a post office box or rural route without a box number.”

According to Rock the Vote, college students who only have a P.O. Box address can instead use their dorm address for voter registration. Students can sign an affidavit, or in some cases, get a letter from a college’s residential life office, to assert that they live at their dorm address.

David and Melissa Gray worked with the administration at Wheaton to send students a proof of residence document the afternoon of the primary. While many students were eventually able to vote, Melissa Gray said the process was bittersweet.

“The most inspirational part was the number of people who didn’t give up on the three-hour process or longer,” she said. “For those that didn’t vote, you can’t blame them because it turned out just as troublesome as they thought it would be.”

Why not just vote by absentee ballot?

Gray said students often want to vote where they go to school because of the early deadlines to request an absentee ballot from their home county.

“There are a lot of students that find absentee a hassle because you have to do it a long time in advance and turn it in on time,” Gray said.

All 50 states plus Washington, D.C., offer absentee or mail-in ballots. However, some states make it more difficult. Twenty states require an excuse to get an absentee ballot. Delaware even requires voters to have a section of the form notarized.

While more states now require IDs at the polls, many don’t accept student IDs as a valid form. Nine states never accept student IDs, and 22 others only accept them if the ID meets certain criteria such as including an address or expiration date or the voter has additional documentation, according to a News21 analysis.

Why is this a problem? One University of Michigan study indicated that the number of people getting a driver’s license – the most common form of accepted ID at the polls – has declined. In fact, many in younger generations have said they never plan on getting a license. They’re too busy. It’s too expensive to own a car. They can catch a ride from others, according to another University of Michigan study.

“The Republicans knew exactly how to suppress votes. That was their intention,” Peck said. “They looked carefully at how they lost in 2008 and found the weak links in that coalition. The law has made it much harder for students to get the proper ID, and there’s several steps they have to go through now to secure what is a constitutional right: the right to vote.”

Peck said he saw this issue come up during this year’s presidential primary when many students had to vote with a provisional ballot because they didn’t have the proper ID. According to the nonprofit Democracy North Carolina, there were 29,000 provisional ballots they fought to have counted in the election.

“To put that in context, that doesn’t sound like a lot, but this state was the closest state in the country the last two election cycles, and the margin of difference in 2008 was 14,000,” Peck said. “So this voting law literally has the impact of flipping a state potentially.”

When the law went into effect, then-North Carolina Republican Party Chairman Claude Pope said in a statement that it would ensure the integrity of the elections.

“Signing this bill into law is just plain common sense,” Pope said. “Proper photo identification is needed to do daily tasks in everyday life such as cashing a bank check or boarding an airplane.”

North Carolina’s voter ID law was struck down by a federal appeals court July 29. State officials have asked the U.S. Supreme Court to freeze parts of that ruling.

Sally Rohrer, a student at the University of Wisconsin-Madison, said the extra step to obtain a valid photo ID in her state created a hassle.

“It’s just one extra thing, and that might deter someone who is not fully committed to voting already,” she said. “I think that’s the biggest thing is just losing the students who might not decide to do the extra step.”

Rohrer had worked with university administrators to bring machines onto campus that would print a valid Wisconsin state ID card for voting since their student IDs would not work. Rohrer said they issued thousands of cards.

Once students got to the polls, however, Rohrer said they also had to prove that they were enrolled at the university. According to the Wisconsin voter ID website, a “university, college or technical college ID must be accompanied by a separate document that proves enrollment.”

Rohrer tried to get administrators to issue new student IDs that would meet the voter ID requirements – to no avail. “They were really adamant about not changing, mostly from our chancellor,” Rohrer said.

In a statement on her blog, Chancellor Rebecca Blank said the change would be expensive and inconvenience those who don’t need the voter ID card. Blank said that the number of students who would need a voter ID card was relatively small. And, she wrote, “experience tells us that – whatever we and others do to encourage voting – a substantial share of students will not choose to vote.”

Rohrer didn’t agree: “It was basically like one of her excuses was that students don’t vote anyways, which was frustrating.”

How did we do?

Republish our work; it's all Creative Commons.